When we talk about skulls, usually the symbolism is death, danger, caution, etc , in some other cultures like the Mexican or Japanese wearing or having famous skull accessories represent festivity and the path to the other life. Whatever the main reason is, wearing a skull represents something important for each one of us, either respect or fear. Let’s keep this in mind and here is a list of the most famous skulls in history:

I’m not talking about the actual skull from Shakespeare that was stolen recently from his tomb. I’m talking about his famous skull that was exhumed by the gravedigger in Act 5, scene 1 of Hamlet, the play. Yorick is a character in the play, he plays a dead jester whose skull was used to represent death, the unavoidable and the inconsequential things of life. Very deep shit.
Many skull drawings and paintings with Yorick’s skull have been made, but Hamlet meditating upon the skull of Yorick is one of the most famous and lasting memories of the play and also in English literature. Yeah, we read.

The day of the dead is a holiday celebrated in Mexico and other Latin countries like Guatemala during the cold days of November 1st and 2nd, matching the Catholic holiday known as  All Saint’s Days which is right after All Hallows’ Eve of the pagan festivities of the Celtics, which believed on that day in the evening, we were more close to our departed. This is the main reason Witchcraft celebrates this day as well.

Between this time Sugar Skulls are made to celebrate our departed people and is made of, you guessed it right, sugar. These famous skulls were made with bright colors, glittery and colourful icing, each of the skulls representing a departed soul, his/her name is written on the skull’s forehead. The little popular skull cake is placed in the gravestone for the dead for its later consumption. Sugar skulls are so old, clay molded skull figures go back all the way to the 18th century!
On the festivities, girls and boys dress as skulls, wearing famous skull clothing such as skull and bones tshirts and skull masks, asking for candies and eating traditional food. The tradition of painting women with skulls came from here. Cute skullgirls now a days are a trend on instagram and a representation of modern individuality and a very nice skull clothing taste. 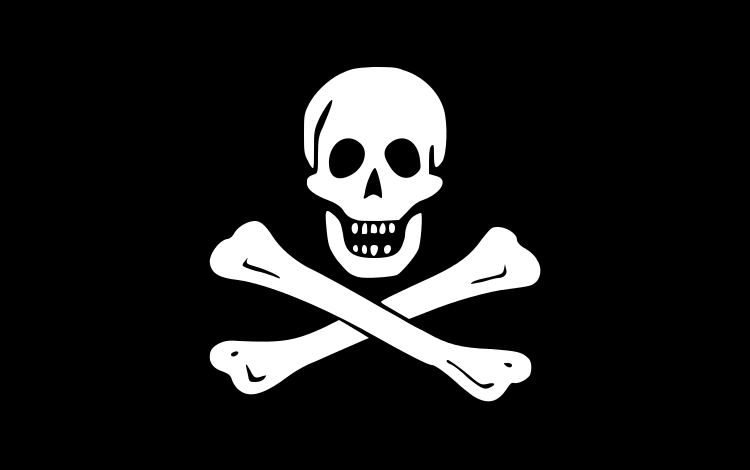 I can’t leave aside maybe one of the most famous skulls images ever created. This is the traditional English way to call the flags of a pirate ship and it’s been around since the 18th century. The skull and crossbones symbol on a black flag was used by many pirates in that time and became the most commonly flag during the 1720s. Two pirates created their own flag based on some old skull drawings by the Barbary Pirates and the black color of muslim flags, calling it Jolly Roger. The famous skull and crossbones flag was used by intriguing pirates such as Black Sam Bellamy who captured 53 ships, Edward England a famous privateer and later pirate or John Taylor popular among his crew for his violent temper. The Jolly Roger skull was used by many pirates of that time and it could be called on of the very first logos in graphic design.

Mythology has a very deep connexion with humans since the beginning of reason. We created fascinated deities and demons to fill knowledge gaps, some of them are represented with a fierce persona, using skulls as their main weapon of fear, but not like the Japanese. When Japan was divided by big feudal lords, nobody could leave the area without a special permit. This isolation made the Japanese mythology very ample with demons, ghosts, gods and goddesses, some of them being the same, but with different name but in this case, skull drawings of these creatures are everywhere in Japanese mythology regardless of the feudal clan and its distance.
The Gashadokuro which literally means “starving skeleton” is a big ass japanese skeleton, fifteen times taller than the average person, said to be created by the collection of skulls and bones of people who died in battle or by starvation, without being buried. These massive japanese skulls are said to roam around after midnight, mostly chilling on the streets waiting for loner travelers,  to suddenly get thirsty, bite their heads off and drink their blood. Basically these giant japanese skulls grab people as their piña coladas, with the head as an umbrella.

We are not talking about the Indiana Jones crappy movie, we are talking about human size skulls carved on clear or milky white quartz, claimed to be from the Mesoamerican region. These famous skulls have appeared in numerous books, sci-fi television series, sci-fi movies and videogames, you can buy them skull drawings in my store and are often claimed to have paranormal effects, are also popularized by the media of having mystical and legendary powers. We don’t know if anything of that is true, we know there are a bunch of crystal skulls around but many, not many, a shit load of these skulls are fakes. The British Museum exhibits its fake skulls as examples of fakes. There are 5 pre-columbian crystal skulls safely guarded in museums worldwide, some people considered them as fakes, but are too perfectly carved to be discarded, even if the tools used are modern. Tales of crystal skulls are everywhere, is just matter of time of finding one. A real one.

Did we miss one? Let us know at the comments below. Also be kind to share this if you liked it.

Tokebi likes skulls and creepy shit, but not any creepy shit, just the ones with pop culture attached to it. Ahh...

https://youtu.be/4WWRf6jzEXY This is the largest Skull deposit/museum in Japan. According to Youtube Blogger "Japan101" There are over 7,000 skulls and skull...